The following patients have all given permission to list their names and medical information. I will continue to add Case studies and update case studies with post MRI findings as patients progress with Spinal Decompression 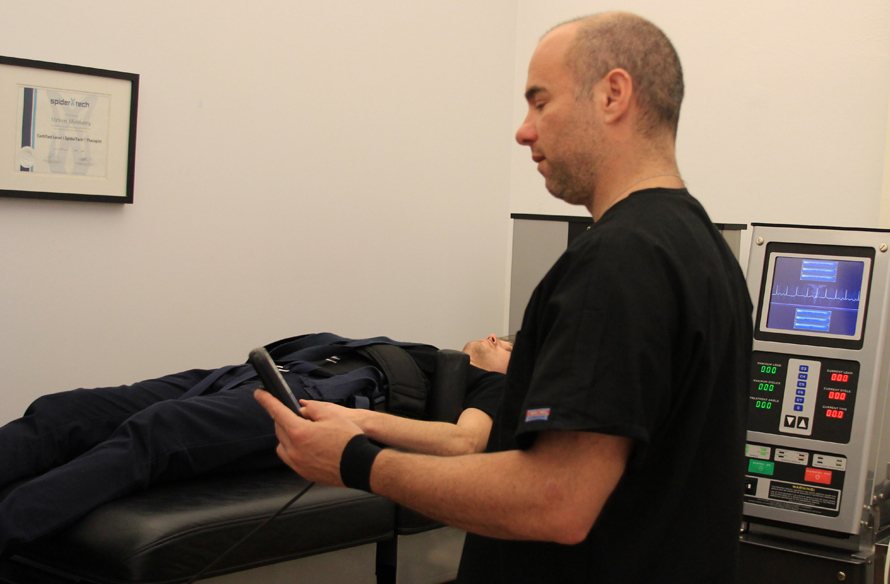 Jose came to my office complaining of severe Low back pain and sciatica which radiated pain into the top of three of his toes. He was just released from the hospital three days ago and was treated for one week with IV pain medication and bed rest and was released.

Jose had a positive valsalva (which is when he sneezed or coughed and created pain into back and leg) Loss of reflexes on his Patellar(Knee)and Achilles tendons (L5 and S1). He also had a left foot drop and extremely weak dorsi-flexion and plantar flexion on the left side (bending foot towards and away against Resistance).

I started treating him with Chiropractic care and immediately referred him out for a MRI. Impression of the MRI at L5-S1, the inter vertebral disc shows some dessication and loss of height mainly posteriorly. There is a prominent discal herniation with extrusion. This is mainly seen to extend to the left side with some compression of the left side of the thecal sac and also the left S1 nerve root.

Once I read this MRI report I suggested Spinal Decompression treatment and we started treating that day. Within 6 visits pain decreased 45% and foot strength increased by 50%. Jose continued to recommended care plan of 22 visits over the course of the next month and by the end of treatment he was pain free and walking normally and is now back at work full time.

Jose did consult with an orthopedic surgeon prior to coming to my office and was told he was a surgical candidate. His symptoms improved 100% with Non-Surgical Spinal Decompression and now he is working full time and did not have a surgery.
*patient has given HIPPA release

Janet presented with a chief complaint of low back, left buttock, and left upper thigh pain. This had started approximately 1 year prior to the first time I saw her by bending, lifting and twisting at the waist while picking up her 25 lb. dog. She felt a sharp pain at the time and could not stand upright. She saw a chiropractor the following day, who treated her and gave her some relief. She continued to feel a nagging ache in her low back despite a home exercise program, and 9 months after the initial injury again sought chiropractic relief. The Chiropractor recommended an MRI and made a referral to me to treat the herniated disc with Spinal Decompression.

Upon reviewing the MRI it was evident that she was showing a 4.2 mm L3-L4 bulging disc and an L4-L5 central disc protrusion measuring 6.1 mm and a 3.8 mm L5-S1 bulging disc with impingement on the left L5 and S1 nerve roots.

Clinical exams revealed a positive Straight leg raise on the left (orthopedic test) and back pain increasing with coughing and sneezing (indication that this is a disc problem) .There was a loss of normal range of motionin the lumbar spine and loss of strength of Quad muscles and foot flexors. Janet had difficulty toe and heel walking and had extremely tender para-spinal muscles and multiple trigger points in her gluteus maximus.

I decided to accept her as a candidate for Spinal Decompression for multiple level disc protrusion and recommend a course of treatment of 24 sessions on the DRX 9000followed by Cyro-therapy(ice) and High Volt stimulation anda Lumbar support Belt and reconditioning treatments. Janet noticed an immediate reduction in her pain and after 12 visit her range of motion was normal and her Leg strength returned and did not have pain upon sneezing. Orthopedic test where negative by the 13th visit .

Janet has completed the full course of treatment and is now back at the gym. I recommended a post MRI to show her the reduction of the protrusion and increase in the disc height we will have results posted shortly.
*patient has given HIPPA release

Mr. Jackson came to my office last year and was walking with a cane he was 35 and had a previous back surgery three years ago and did not another surgery. This is an interesting case due to the fact I was given a pre surgery MRI and post operative report both of which I listed below.First I will list his MRI finding as of 08/11/00 L4-5 large central HNP and a HNP at L5-S1 with extrusion of disc material behind the the S1 vertebral body slightly to the right of the mid line indenting the thecal sac in this region and deviatingthe right S2 nerve root posteriorly.

After the MRI was taken and all conservative measures at the time where utilized surgery was scheduled, Mr.Jackson underwent an L4-5, L5-S1 microdiscectomy and his postoperative course of recovery was uneventful. Mr. Jackson reports 6 years where he felt great and one day he bent the wrong way and symptoms returned and he was doubled over in pain and followed a conservative approach of physical therapy, Anti-inflammatory medication and bed rest. After 6 weeks of pain he consulted with me for spinal decompression therapy.

His symptoms included major shooting pain in to the right leg and difficulty in walking for more than 10 steps without having to stop due to the severe pain in his legs (a sign of neuro-genic claudication.

Once I confirmed that he did not have any metal implant in his spine I decided that this approach would be beneficial. Mr. Jackson responded immediately to treatment, by the third visit his gait improved and he did not need the assistance of the cane.

Mr. Jackson came in for 24 consecutive spinal decompression treatments. The outcome of the sessions where that Mr. Jackson avoided another surgery and he was able to returned to his previous routine of walking 2 miles to work in the mornings. Failed Back Surgery syndrome responds well to Spinal Decompression therapy as long as there are not any metal implanted into spine.
*patient has given HIPPA release

In the coming days I will be uploading case studies I have been collecting from patients that have granted me HIPPA release and authorization to post medical and diagnostic information. I will post Signs and Symptoms and treatment protocol followed and results from Spinal Decompression treatment, and follow patient success rates for extended periods of time.

The goal of this page is to share with the public results and  outcomes of patients treated with Spinal Decompression treatments in treating herniated disc's. 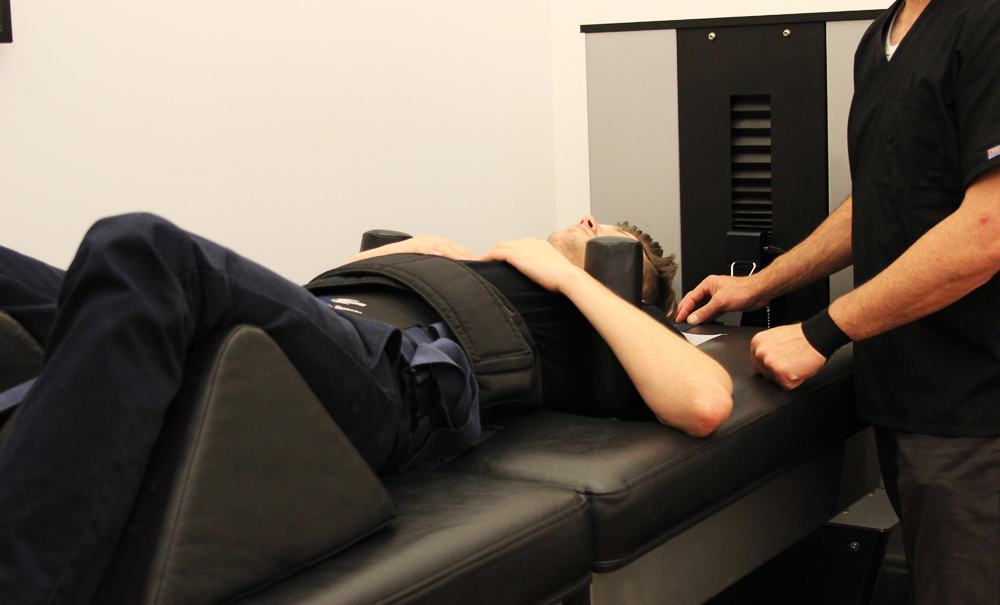 The clinical results of an IRB-approved prospective, multi-center, phase II, non-randomized pilot study utilizing the DRX9000™ will be presented at the 18th Annual Clinical Meeting of the American Academy of Pain Management in Las Vegas, NV September 27- 30, 2007. The study, authored by Dr. John Leslie of The Mayo Clinic, was designed to evaluate the effectiveness and safety of the DRX9000 in the treatment of chronic lower back pain. Patients enrolled in the study had suffered an overall average of ten years of chronic back pain. After two weeks of treatments on the DRX9000 there was a 50% reduction in pain scores and upon completion of the entire six week protocol an amazing success rate of 88.9% was documented. The patients also reported an improvement in their Oswestry Disability score. Abstracts and copies of the presentation will be made available following the release of the study data at the American Academy of Pain Management.

Non-treatment or control groups were not included making efficacy outcome versus placebo or spontaneous recovery difficult to determine. Randomized double-blinded or comparative long-term outcome trials are needed to further prove the efficacy of non-surgical spinal decompression systems such as the DRX9000Ô for the routine treatment of chronic LBP. This study was partially funded by Axiom Worldwide.

Patients that undergo spinal decompression combined with a core muscle strengthening program see a better response than those that do not.  Our focus is on Non Surgical Spinal decompression. We offer Complete Physical therapy services that is covered by most health insurance.

We look forward to hearing from you